From code/src wiki
Jump to navigationJump to search

Apologies for the delay in finally fixing this bug and getting the firmware stable. The v6 boards will leave BETA status now as soon as the scsi2sd-util6 utility supports firmware updates on all platforms. Performance improvements (ie. 10MB/s synchronous support) will be done after firmware upgrade is fixed.
Early adopters should update the firmware using dfu-util on Linux or STM DfuSe on Windows. Remember to put a shunt on the pins labelled "BOOTLDR" and reconnect the USB cable to enter bootloader mode.

[17 May 2016] Sneak-peak at the new V6 boards
SCSI2SD V6 will go on sale from 28th May with BETA quality firmware. This is a completely new hardware design which adds commonly requested features.
The V5 boards will remain available for the foreseeable future. Most people should continue to buy the older V5 board ! The V6 boards are more expensive to produce, and most people don't require the additional functionality.

[20 April 2015]Sold out, again.
I've partnered with a new manufacturer to build the SCSI2SD in higher volumes, and to sell them direct from China. This will ensure availability and will also improve shipping options. New boards should be available in a few weeks time.

Many users have noticed that I'm currently out-of-stock. I didn't order new boards quick enough to beat the Chinese New Year Holiday rush, and now I need to wait until the PCB manufacturers resume trade. I expect new stock by the end of March.

Here's a sneak-peak at a new design I've been working on: 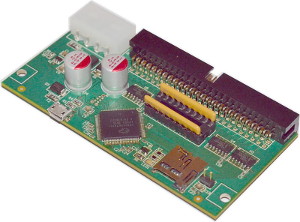 You'll notice this board is half the size, which makes it cheaper to produce in volume. The power supply has been reworked to be much more efficient, and will allow the new SCSI2SD to run on the terminator power alone. In many cases there will be no need for the power cable. This new version uses the same firmware as the older boards and does not offer any performance advantages. I'm also working on a small 50-pin to DB25 adapter board to replace the current external SCSI2SD.

[23 Nov 2014] Price Increase :-(
For those of you upset over the increase, please keep in mind that SCSI2SD is open source, and you have rights to build, modify, and sell the boards yourself. Everyone else has the right to build the boards and sell them for the original price.
I've had to increase the price of SCSI2SD boards to $125 AUD in order to reduce demand. The price may increase further if strong demand continues.

Continued high demand for the boards is leaving me with no time left to work on firmware development. Also, I can no longer rely on "catching up" on orders over the weekend due to high summer temperates in Australia - soldering during 40°C daytime temperatures (104 farenheit) is not pleasant. Soldering during the evening is the only viable solution.

I haven't completed any of the promised new features yet. As always, I'm behind schedule. I'm still working on a new GUI configuration tool, multiple-device support (ie. emulating more than one SCSI device), and USB mass-storage support. I'm away on vaction this month, so these features won't be ready until October.

[16 Feb 2014] v3.2 firmware released. This is an important bugfix release. All SCSI2SD users are urged to upgrade to this version.

[02 Feb 2014] I've created the SCSI2SD FAQ to answer some common questions. I am currently working on resolving compatibility issues with some samplers, adding configurable sector-sizes, and creating a smaller 2.5" version to suit old Powerbooks.